First introduced in The New Teen Titans #2 in 1980, Deathstroke has been a favorite among fans everywhere.  Originally the main Teen Titans villain, he has progressed to fighting big time superheroes such as Superman in Batman in more recent comics.  Deathstroke’s real name is Slade Wilson, and his origin is that he joined the military when he was a teenager and had so much potential that he was used in government secret experiment to turn him into a meta-human soldier.  The procedure left him  unstable, but left him with incredible super human powers such as being able to use over 90% of his brain capacity, super strength, and being skilled with many weapons.  After discovering his powers, Slade Wilson chose being a mercenary as his day job and began to do contracted kills.  Despite being a criminal, Deathstroke had a family and was convinced to retire for a short bit to be with them, but instead he recruited his son to go on a mission with him.  This resulted in his son dying, and the original story of how Deathstroke lost his eye was when his wife found out that their son died, she shot him in the eye (this story has changed a lot in the past and the most recent one was that Green Arrow stabbed him in the eye).  Although he vowed to never let his kids get involved with his job again, he trained his daughter Rose to become an assassin, but she became Ravager and joined the Teen Titans as a hero. 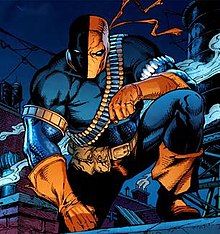